Some of you might remember the interview I posted a year ago when I was working in Buenos Aires. In the first week of my apprenticeship my mentor, Alejandro Geiler, told me about Silvia Turbiner, a paper artist from Argentina. “She is an excellent paper maker,” he told me and insisted that I contact her. I took the hour and a half bus ride to the Buenos Aires suburb of Martinez where Silvia welcomed me into her studio. A warm fire was going and classical music played softly on the radio. She brewed two cups of tea and we got down to talking paper and process.

I wrote up that interview as an artist profile for the Summer 2015 issue of Fiber Art Now. Click on the image below for a PDF of the profile. If you want to read more, I’ll repost the entire interview underneath. Enjoy!

The Fiber Wire [FW]: You came from a career in architecture?

Silvia Turbiner [ST]: Yes. I am an architect. I had very good professors. I loved design, color and texture. It was very good for me. I worked as an architect until 1996 in restoration of buildings, also working on my stuff and classes too. At that time I felt like Wonderwoman: raising kids, teaching and my work. Till I said, that’s it. I’ve had enough of commitments. I’m going to work only in my things, teaching and creating… it was perfect.

FW: Was it a scary change for you?

ST: It took me five years to make that decision, to say, “that’s enough!”

FW: Did your friends think you were…

ST: Oh! My father! He said, “You’re crazy, how are you going to live?” But it was the best thing I could have done.

FW: Do you remember the first sheet of paper you made or your first experience with paper?

ST: Yes. It was in 1982 with my great professor Luis Negrotti. He was incredible. It was just computer paper, recycled. It was a basic paper, really. At that moment the only thing we’d done was cut up the paper, put it in water in the blender and that’s it. The second piece that I made was a very, very, very big one. It was made of recycled paper and it lasted a short time. That made me study about fibers and experiment with phormium, sisal, banana, abaca, and kozo. 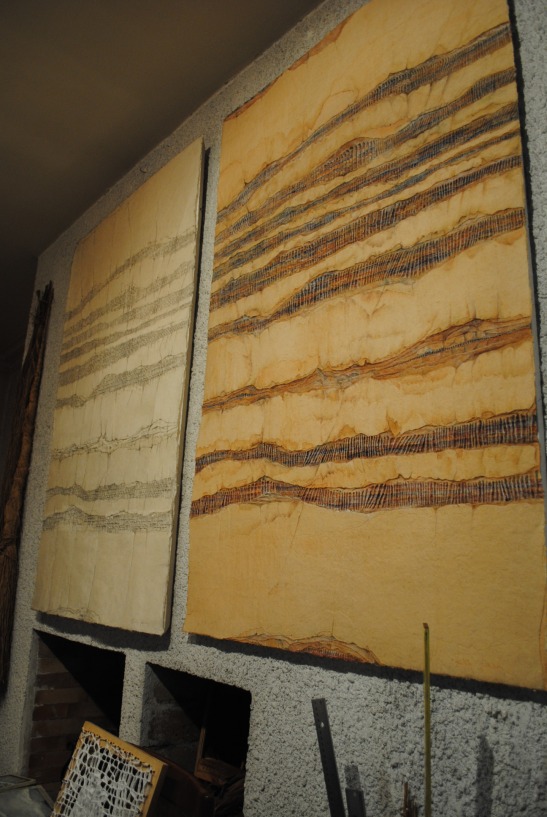 ST: This is cotton with banana (right). This is kozo (left). This is my first kozo, from 1998. I exhibited it in the States and in Spain, too. I will never use it for casting again. The fibers are too long. I use them now in a different way.

FW: How do you get something like that abroad? It’s huge.

ST: Do you see my wrinkles? That is why my pieces are small or foldable now.

ST: Yes, I can take it in my pocket! But, this was terrible. You have to check it. It went in a very big box. You have to get it into the States. You have to go to the police and say that you don’t have any drugs in there.  It’s the same thing coming back. That was my last time. 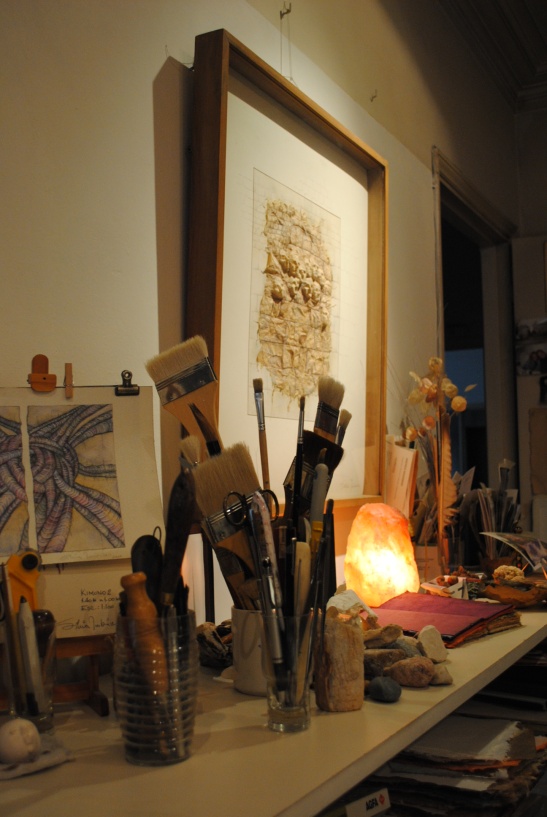 ST: This piece here is with artichoke.

FW: The leaves of the part you eat?

ST: Yes. After you eat it, yes. It’s incredible.

ST: You cook it. Yes. You don’t use lye. The artichoke is very strong. You use sodium carbonate, at about 18%, and it will cook down. First you have to let the leaves dry in the sun. If not, it will be very green, the paper. If you want it golden, you have to dry it.

FW: And how did you get the sheet to dry in this shape?

ST: I made the face in clay, of my grandfather, and form the paper on top. When it was humid, not wet, I stretch the paper to change the faces. But I used just one mold. This is a very old piece. 1992.

FW: Do you look at it and think, that was the beginning and look how far I’ve come, or do you still feel very connected to it?

ST: Still connected. And you know that this is very different from what I’m doing now. Time makes you work with thinner materials… less is more… There’s always an idea behind the work before I start, always an idea. I have to draw and write it down. There is something inside, there’s meaning and substance… If not, I don’t want to do it just because it’s nice…I need to express myself…

FW: Or because it’s what sells? Because people want it in the gallery?

ST: No, no. If people want something in the gallery I put my brain in half and say, ‘okay. I do what you want” because I need to live. To me it’s okay because it’s something new and I like the challenge of doing something new. But I won’t repeat a work. Doing a work for the second time, exactly the same? Never.

FW: No edition work for you.

ST: No. I think that’s boring. When I know the work I just have to go to another thing. I made a book that’s in a show in Italy. There were three books together. It was in this shape. But you see it’s not the same. This one has a cover. Another one doesn’t. It is part of a series.

FW: I read another interview done with you. You said that you think your best research and training was personal experimentation in the last 20 years.

ST: Yes. It’s the only thing I think I love.

FW: You’ve done a series with kozo and watercolor, too.

ST: Yes, Tinted with watercolor with no control. And then it was drawn on afterwards. 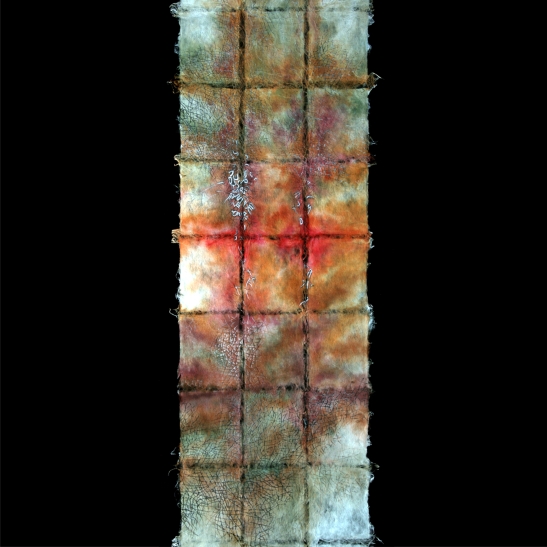 FW: When you did the watercolor the fibers were wet still?

ST: In this case I beat the fibers to make the pulp and I wet the paper. It’s the only way that the color flows. What I like is that you don’t have any control over that. That’s good, for once, to not have any control.

FW: and you beat it.

ST: No, I don’t beat it. I separate the fibers by hand. For my first piece I was like, ‘what did I find?! Wow! Because it was a mistake. I was cooking and it wasn’t a very good cook so…I started pulling and playing with the fiber. 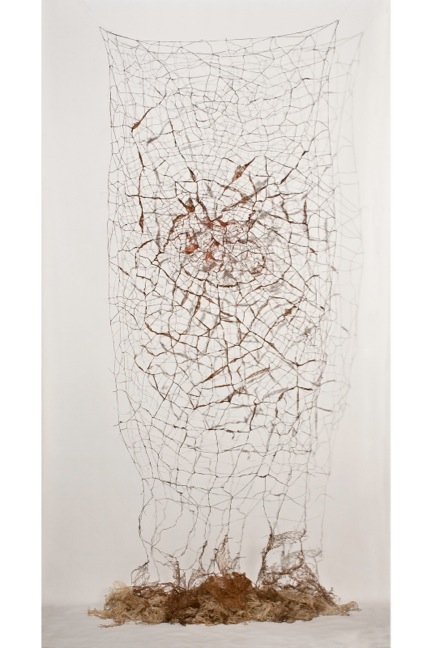 ST: This is a very big piece that is woven in the air.

FW: What does a piece like this feel like to you, when you’re making it, when it’s done.

ST: I’m speaking about fragility. Fragility and strength. That contradiction, because it’s a strong piece. You know, it was exhibited in Palais de Glace two years ago. I hung a white fabric behind it because the shadows in the piece are amazing. The fabric went down on the piece and nothing happened. The threads are minimal. They are very, very, very thin and nothing happened.

FW: It appears so delicate but it’s not at all.

ST: Yes, it’s the contradiction. And the people don’t know what it is and they say, oh I can’t touch this. It is fragile. It will break. But it’s very strong.

FW: Do you see lights go on in people’s heads when they explore fibers for the first time in one of your workshops?

ST: It’s amazing. They think if you do it in a certain way that you cannot touch it again, but no! You can redo it and remake it a lot of times. I have very good students. Most of them architects, painters and I have this student from ceramics. She is going to try to use both techniques together. There will be such mystery, which is ceramic and which is paper…

FW: I read that you’ve given seminars and workshops abroad, too. Can you talk a bit about that?

ST: I went to Columbia College in Chicago in 2006 to give a seminar about design in artists’ books. The most important thing I learned through architecture is design. You use it in everything. The workshop was intensive. We worked in design. After four days of working from 9 to nearly 6, each person had made an artist book. It was incredible because I had different people there. I had a jeweler, a painter, and a sculptor. It was really great.

FW: All the different approaches

ST: Yes. It was incredible.

FW: How did it come that you taught the seminar at Columbia?

ST: I was invited to NY for SOFA (The Sculpture Objects Functional Art + Design Fair) with an artist book. Then they invited me to SOFA Chicago and I met a man who owned a gallery. He said, ‘you have to come here and give some classes.’ So I said yes. They paid me, not for the trip, but for where I was living, which was incredible. I had all of a flat to myself. It was snowing – incredible! It was beautiful. I went to Chicago and thought, this city is beautiful but it is so cold and windy, this is the last time. It was winter. I went there six times after that.

FW: Each time for seminars and teaching?

ST: Yes. One time in a university. One time in a cultural center, not in Chicago, in the suburbs. Once for an exhibition. The door that opened for me in the States was amazing.

My last time was 2011. I went there to a friend’s studio. She had a very important show in Miami. She was working for the first time in paper. I was there for two weeks giving classes in her studio. The time before I went to Rhode Island where I was working in another studio. I also have two people I teach design to over Skype.

FW: Skype? How does that work?

ST: Perfectly. They come here once a year for a workshop and leave with a lot of work.

FW: The Internet in connecting papermakers from all over the world!

ST: This is how you met Alejandro?

ST: I can’t believe that.

FW: Through the Friends of Dard Hunter group. 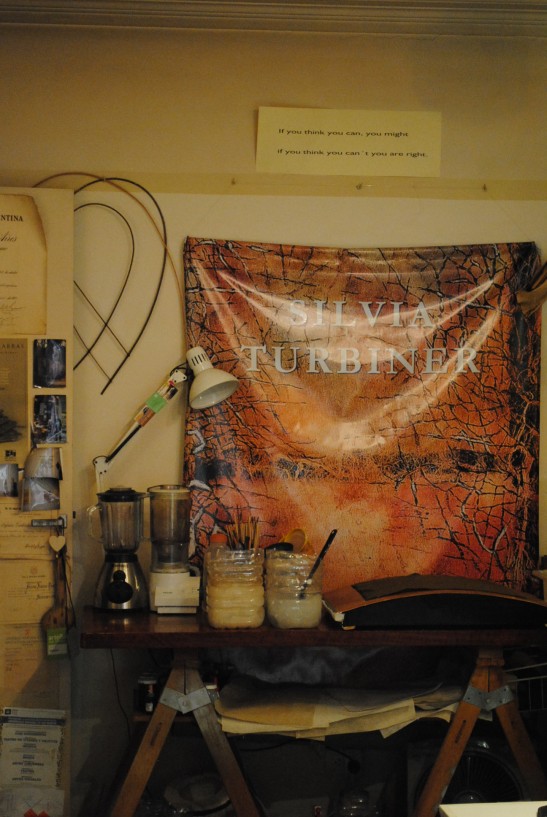 ST: Yes. I love it too! Or with the Bukowski poem. I have it in Spanish but it is much better in English.

FW: Is it the one about having air and light and time and space?

ST: Yes! I really agree with that.

To see more of Silvia’s work, visit her website at http://www.silviaturbiner.com.ar

Looking into the Studio from the Gallery 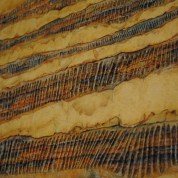 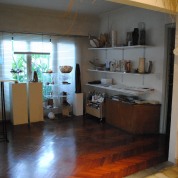 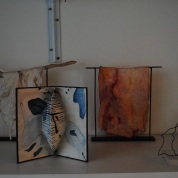 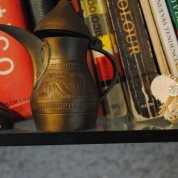 Lovely Collection Displayed on the Bookshelf 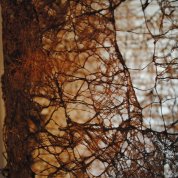 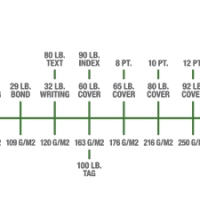